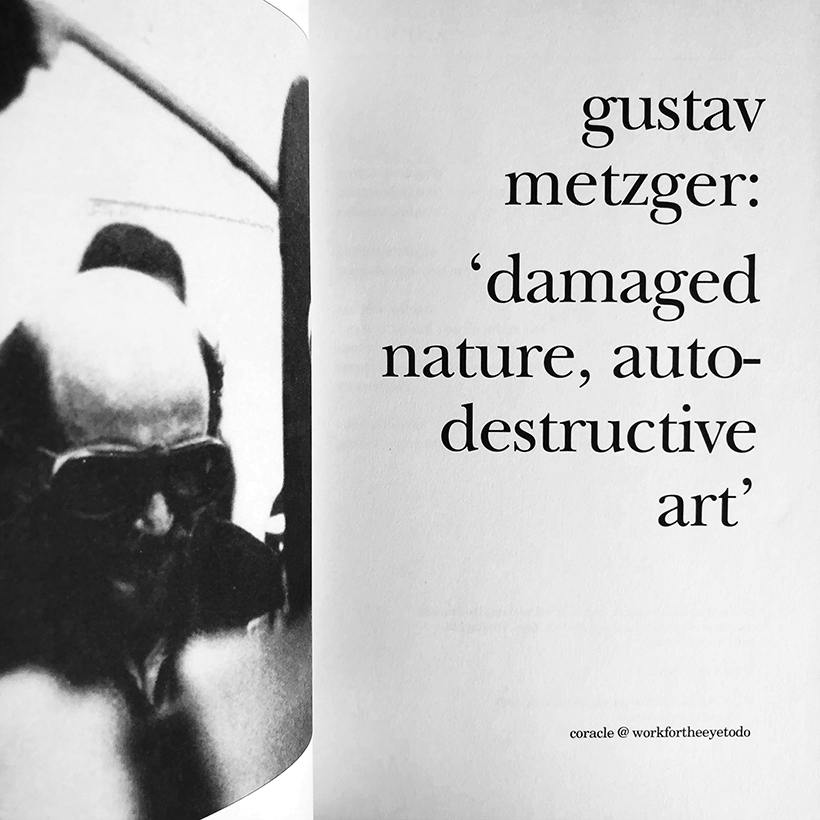 German artist and activist Gustav Metzger was born to Jewish parents in Nuremberg in 1926. Having found refuge from the Nazis in the UK in 1939 and having been awarded a grant by the Jewish community there after the war, he was able to study at the Royal Academy of Fine Arts in Antwerp in the late 1940s. His experience of mankind’s destructive capabilities during World War II led him to formulate his concept of Auto-Destructive Art in 1959. Metzger’s radical concept – which also drew inspiration from Dada, Russian revolutionary art and Moholy-Nagy – influenced The Who’s Pete Townshend in the early 1960s. The Who’s notorious destruction of musical instruments during their live performances can be traced back to Metzger’s ideas of incorporating destruction into the creative process. Living and working in London, Metzger remained an elusive and uncompromising artist until his death in 2017.

Coracle Press published their excellent Gustav Metzger: ‘damaged nature, auto-destructive art’ in 1996. The book, now long out of print and sought after, combines Metzger’s essay Nature demised resurrects as Environment (1992), his lecture ‘Auto-Destructive Art’ (1995), photographs, an essay by Andrew Wilson and an extensive Metzger chronology and bibliography by Clive Phillpot. The condition of this particular copy is fine, with only the slightest damage of the cover.