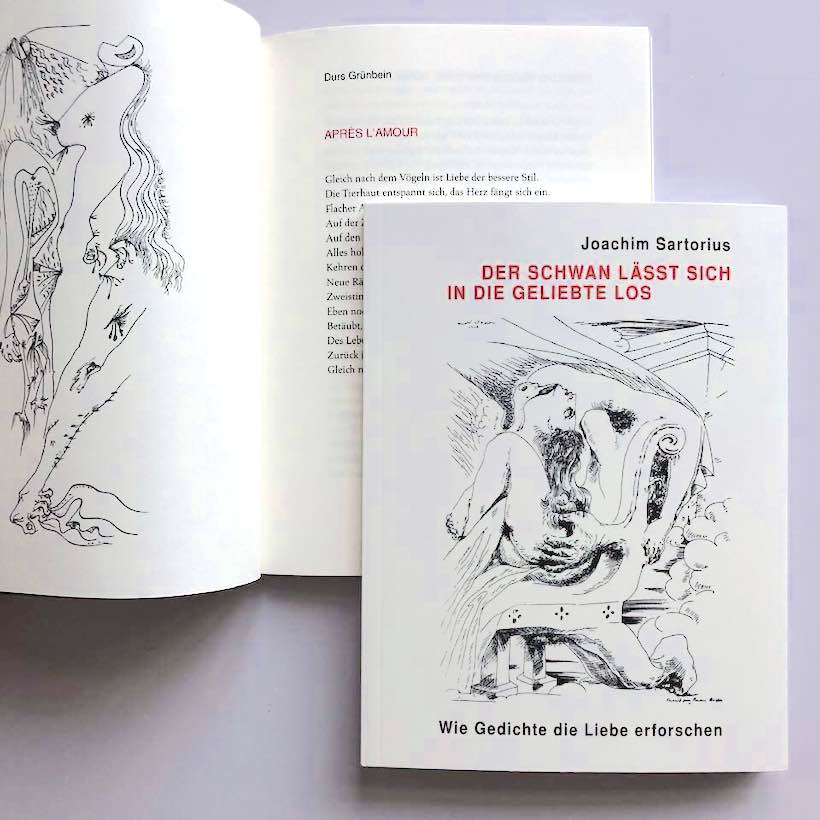 German writer and poet Joachim Sartorius (Fürth, 1946) grew up in Tunis and currently lives in Berlin and Syracuse. From 1995 to 2000 he used to be Secretary-General of the Goethe Institute and from 2000 to 2011 Intendant of the Berliner Festspiele. He has published eight poetry compilations, three travel journals and numerous collaborations with visual artists. He himself published works by Malcolm Lowry and William Carlos Williams and a number of German poetry anthologies. Sartorius is a member of the German Academy of Language and Poetry and was awarded the August-von-Platen Prize for his collected works in 2019.

Der Schwan lässt sich in die Geliebte los, subtitled Wie Gedichte die Liebe erforschen, contains ten love poems by various German poets compiled by Joachim Sartorius. The poems by Rainer Maria Rilke, Gerhard Falkner, Bertolt Brecht, Gertrud Kolmar and others are each commented on in short essays by Sartorius and are combined with two drawings by surrealist André Masson. In his postface to this edition, which was beautifully designed by Ralph Gabriel, Sartorius explains his choice to present the reader with a wide variety of approaches to love poems: “[These poems] can’t be put in the same box. What unites them is the poets’ search for love’s true nature and on this mad, breathtaking and beautiful quest the reader is now able to join them.”