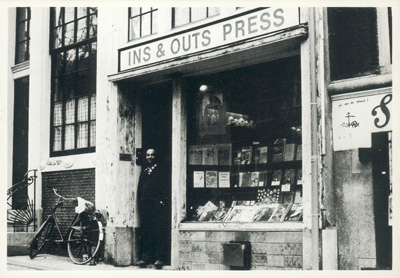 Amsterdam-based Ins & Outs Press sprang into being in 1980 as a natural extension of Ins & Outs magazine, the first three issues of which were edited by Eddie Woods and Jane Harvey in 1978 (as was a fourth bonanza issue in 1980). Until mid-1992, Eddie and Jane ran the press from a centuries-old monument building located on the quiet fringe of Amsterdam’s red-light district. During the first two years the press was also home to an alternative bookstore, and thereafter to a gallery plus performance space.

Through their numerous international contacts, Ins & Outs developed into a hotbed of poetry and radical cultural activity in the heart of a town that at the time was going through a rowdy and violent phase in its legendary anti-authoritarian history. Among others, Ins & Outs published Allen Ginsberg, Ira Cohen, Paul Bowles, William Levy, Gregory Corso, and Gerard Malanga, et al. And also staged live readings by Jack Micheline, Harold Norse, and Herbert Huncke.

Sea Urchin salutes Ins & Outs and is proud to distribute the remaining stock of this uncompromising literary press, that in 2005 resurfaced from a long hiatus with the publication of Eddie Woods’ classic poetry collection Tsunami of Love: A Poems Cycle.