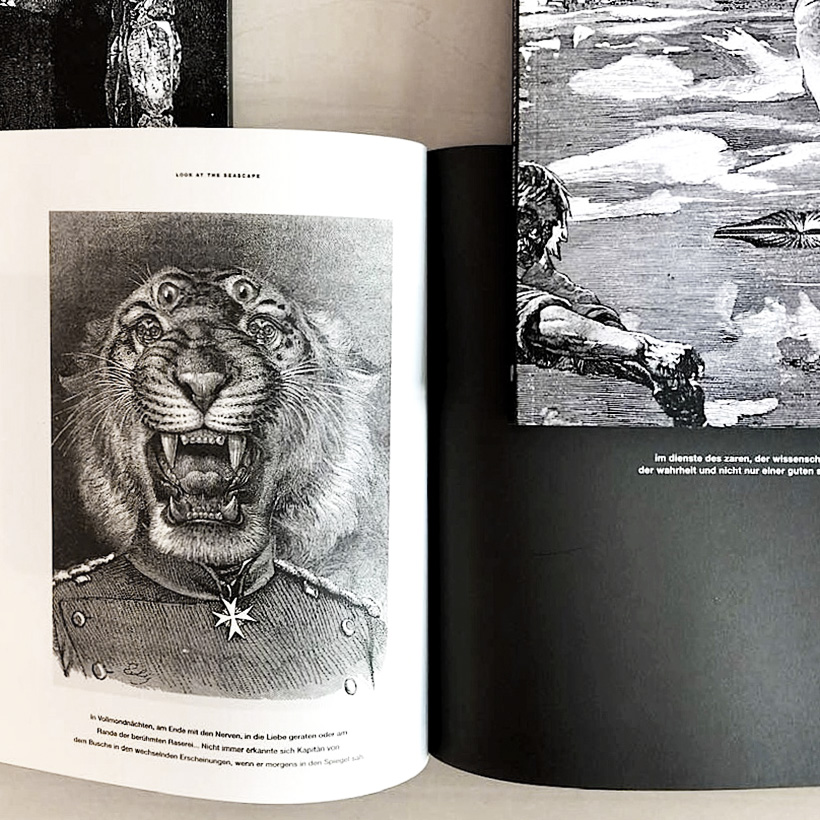 Gregor Kunz – Look at the Seascape

Gregor Kunz‘s collection of collages Look at the Seascape is subtitled ‘Captain von dem Busche and his adventurous life, as told by himself’. Furthermore the Moloko Plus book, beautifully designed by Robert Schalinski, mentions that this is just the first volume of the Busche trilogy collages, which Kunz produced between 2000 and 2009 and comprises some 500 pieces of work. This first volume was previously published by Edition Raute, Dresden in an edition of six hand made copies in 2002, remounted in 2013 and has now been published by Moloko Plus in an edition of 123 collages, divided over 7 chapters. Volume II (Inscape) and volume III (Escape) are to appear later.

With its tongue-in-cheek references to Max Ernst, Jules Verne, Baron Münchhausen and its quotations from authors and poets as varied as William Blake, André Breton, Octavio Paz and Alfred Jarry, this compilation of woodcut collages is Kunz’s personal exploration of the 20th-century avantgarde and its 19th-century predecessors. With the fictitious Captain von dem Busche at the wheel, Kunz manages to navigate from territories already charted in the 19th and 20th centuries, to more personal horizons and coasts. Kunz’s approach turns each of his collages into a strange, at times unsettling, adventure. We can’t wait for Volumes II and III to appear to see where this voyage of the absurd leads.