Over the years Bill Levy has dug up his Jewish roots a number of times to inspect them and check their viability in the godless soil that he walks. Various pieces in ‘The Fanatic’, ‘Exquisite Corpse’ and ‘Semantikon’, for instance, were written to that end. Another piece, Levy’s probing ’Two coordinates on a map of low revelation’, was published in City Lights Review #4 in 1990. Sea Urchin has now re-published the latter text as a hand made chapbook.

Two coordinates on a map of low revelation are two beautifully written observations in which Levy reformulates the concepts of ‘worship’ and ‘holiness’. Levy discovers genuine worship in a Jewish butcher in the Marais who is about to hack a cleaver into a side of meat, and he finds holiness in an Israeli gangster’s father who volunteers to perform nether tasks in his synagogue as ‘God’s lavatory attendant’. ‘All the ways of earth are paths to heaven’, Levy quotes from Erich Gutkind in his piece on the Parisian butcher to conclude in the second piece through the mouth of the gangster’s father: ‘in order to make the world holy we are commanded to perform God’s lowest as well as highest rituals’. 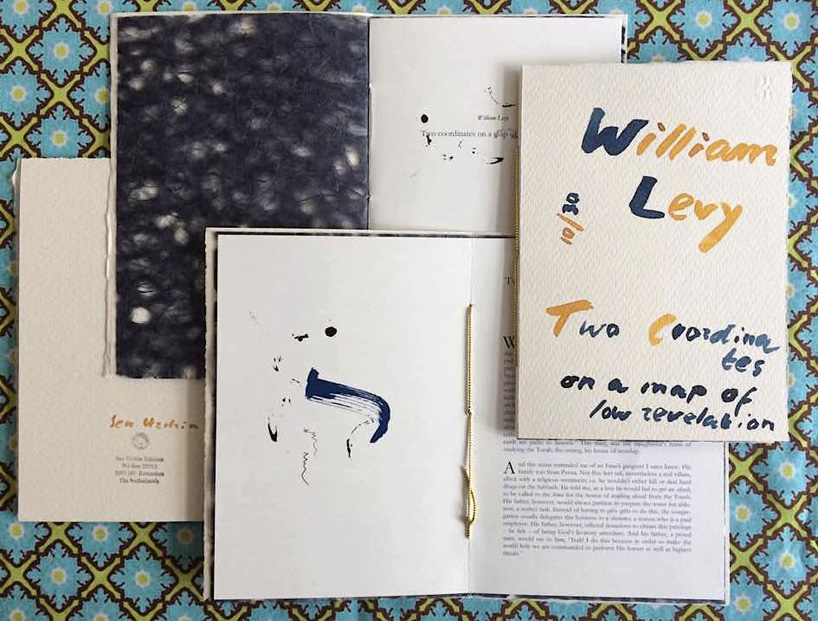 William Levy (1939-2019) attended the University of Maryland and Temple University and taught in the literature department at Shippensburg State College, Pennsylvania, during which period he co-founded the poetry magazine ‘Insect Trust Gazette’. Levy developed into a spearhead of the European underground soon after he had left the US in 1966. As chief-editor of the underground magazine ‘International Times’ and the first European sex paper ‘Suck’, Levy found himself refused entry to England as a “thoroughly undesirable character” and a “dealer in pornography” in 1970. After having been detained in England for a week, Levy was given the choice of either going to Holland or being sent to an English prison. Levy chose the former and settled in Amsterdam, where he lived with the literary translator Susan Janssen until his death in 2019.