Matthias Penzel was born in Mainz in 1966. After having spent his childhood in Strasburg, Kaiserslautern and Ludwigshafen he studied Philosophy, German studies and Sociology in Cologne and lived in London for ten years. In London he worked for Wired magazine, the BBC and became editor-in-chief of the rock weekly Kerrang!. Penzel has lived in Berlin since 2001 where he was in charge of the German edition of car magazine Octane from 2012 to 2016. Penzel has travelled extensively and – apart from journalistic articles – has written a rock opera with Uriah Heep’s Ken Hensley, lyrics for Udo Lindenberg, the Jörg Fauser biography Rebell im Cola-Hinterland, audio plays and several novels. 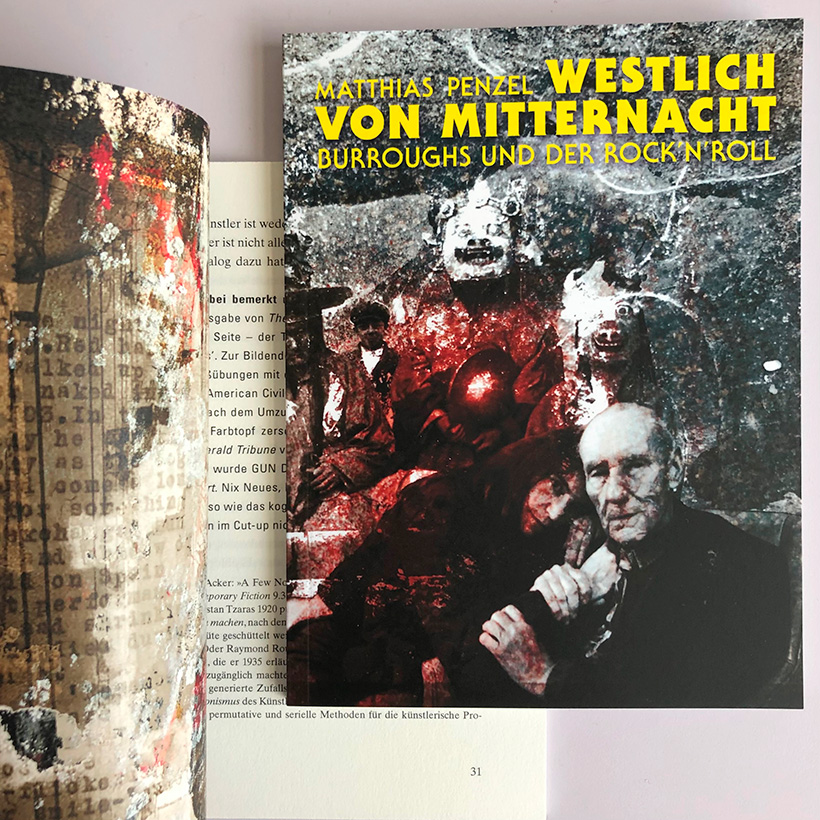 In Westlich von Mitternacht, published by Moloko Plus in 2021, Matthias Penzel charts William Burroughs’s influence on rock ‘n’ roll. The thorough essay, underpinned by a large number of footnotes and endnotes, opens with a poem dedicated to Burroughs by Margita Haberland and is illustrated by 17 digital photo montages by Gregor Kunz, one of which is printed on the cover of this fine edition, which was designed by Ralph Gabriel. Penzel mentions bands such as Soft Machine and Steely Dan, who named themselves after Burroughsian titles and wordings, Burroughs admirers such as Genesis P-Orridge and Patti Smith, the influence of the cut-up technique on rock music and sampling, collaborations with musicians, Burroughs as a role model in gay liberation, junkiedom and DIY publishing and much more as the following choice of chapter titles will illustrate: Children of the Revolution, …A Virus from Outer Space, Electric Revolution, Mass Control and Mensch Maschine [ctrl]. “Know-why is more important than know-how”, Penzel explains in his chapter 1969, The Dead Star, it is the fundamental attitude that godfather Burroughs and rock ‘n’ roll have in common.