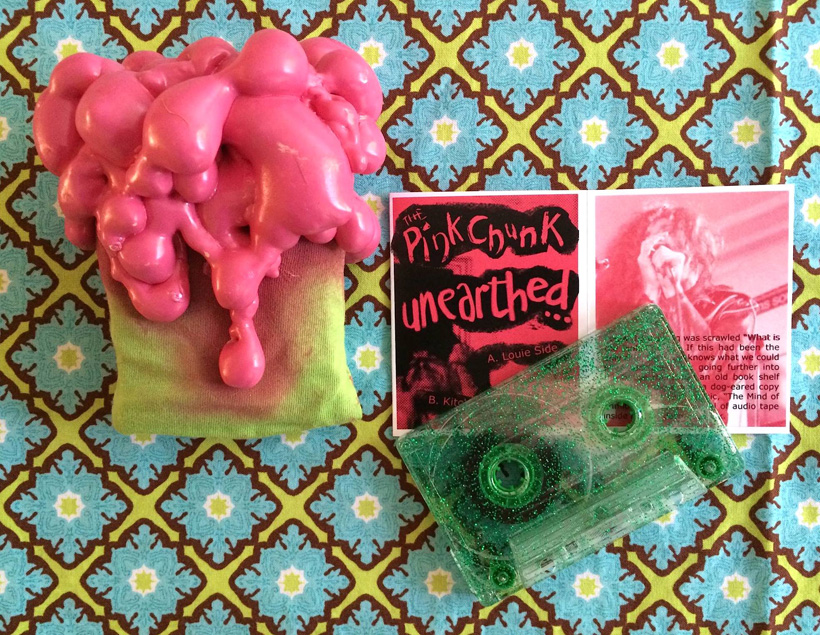 In the late 1960s a group of young artists and students from Seattle started a commune in an abandoned farmhouse in the Snoqualmie River valley, Washington. Among them were Conrad Uno, Mark Wheaton, Mike Freeman, Mark Sargent and Carl Smool. They named the former dairy farm ‘The Loon Lagoon Home for Retired Balloonists’ and, in their spare time, started playing improvised music and fooling around with their tape recorder. From these loose and free-spirited jam sessions and experiments a real band arose over the years: Uncle Cookie, who had a 7″ released on Little Orange Babies in 1977. ‘The Pink Chunk’ was a side-project of Uncle Cookie’s and they had their own 7# released a year later. The A-side was a take on rock classic ‘Louie Louie’ and the B-side the ‘Kitchen Cantata’. The ‘Louie Louie’ side was recorded around 1970 by Mike Freeman and Conrad Uno on a sound on sound Sony tape deck. The ‘Kitchen Cantata’ was recorded live in the kitchen in the Uncle Cookie House with Carl Smool narrating and Jass the Wonder Dog whining as kitchen implements were used to make noise. The 7” was rated a 10 (for a masterpiece) by Lester Bangs in The Village Voice in 1979.

No Basement Is Deep Enough has now released these two psychedelic free-form jams by The Pink Chunk on cassette. The cassette comes elegantly packaged in a green hand made sock topped with a polyurethane blob, spray painted pink. Insanity’s tuxedo. A fold-out insert with an accompanying text and photos is included, but those are insane too.