Slowscan vol. 33 is a re-issue on vinyl of a cassette that was released on Reflection Press in 1972. Reflection Press was run from Stuttgart from 1968 to 1988 by Fluxus artist Albrecht/d (1944-2013), whose press was an extension of his practice as an action, happening and mail artist. Albrecht/d staged his first Aktionen/Happenings in 1966 and founded Reflection Press in 1968. Between 1967 and 1972 he organised and took part in projects with leading Fluxus artists, such as Wolf Vostell, Nam June Paik and Allan Kaprow. One of those improvisational projects was released on cassette on Reflection Press in 1972 under the title ‘Die Abartigen – Den Satz Von Herrn Neuendorf Wiederholen’. A ‘Zufallskomposition’ by Nam June Paik was also included on the edition, a standard Philips SQ-C60 cassette which had ‘AbarT von küNsTlern’ stamped on its label. 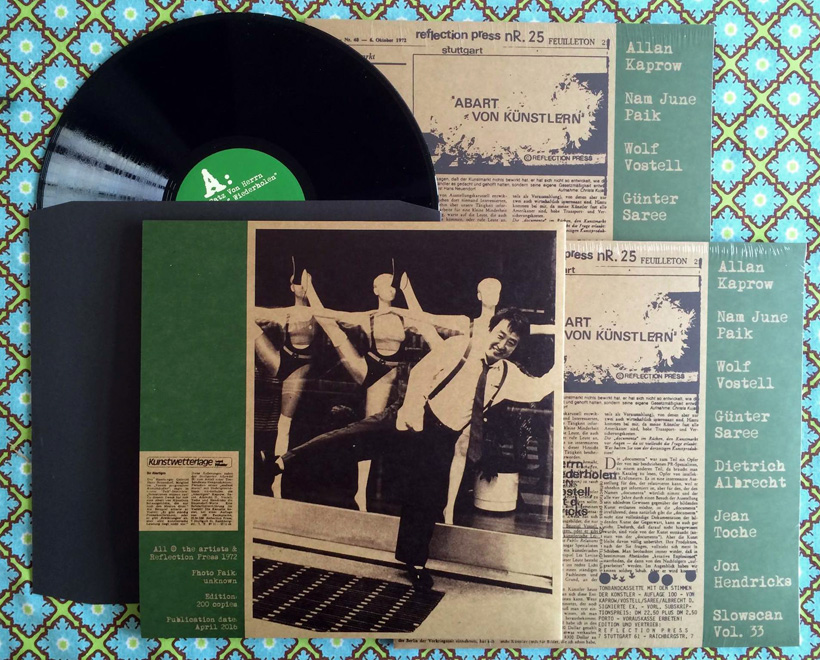 The German word ‘abart’ brings to mind the infamous Nazi label ‘entartete kunst’. The terms ‘Abart’ and ‘Abartigen’ had been used by German art dealer Hans Neuendorf in an article to discredit certain artists of the German avantgarde, Wolf Vostell in particular. Albrecht/d and friends took Neuendorf’s derogatory remarks, deconstructed them and threw them back into Neuendorf’s face as a Fluxus sound collage. Neuendorf’s remarks were reworked – usually by telephone – by Kaprow, Paik, Vostell, Hendricks, Toche, Sarée and albrecht/d and were released on cassette as Reflection Press # 25 in 1972. A signed copy of this release is in Jan van Toorn’s collection. Through Van Toorn’s own Slowscan label this rare anti-establishment document has now been made available on vinyl in a handsome and limited edition of 200 copies.