Artist, publisher, filmmaker and poet Henri Chopin (1922-2008) bought his first tape recorder in 1955, after which he started experimenting and pushing his poetic output into the realm of sound poetry. Chopin counts as a pioneer in that field, coupling attitudes and approaches of the early 20th-century avant-garde with new technological possibilities and bringing together in his poetry revue OU (1964-74) international iconoclasts such as original dadaists Raoul Hausmann and Marcel Janco and post-war lettrists, Fluxus artists and Beat poets such as Gil Wolman, François Dufrêne, Ian Hamilton Finlay, William Burroughs and Brion Gysin. Chopin’s pieces are the result of an uncompromising approach of poetry, in which speech itself is taken apart and put together again in raw and anti-aesthetic compositions. Or, as Michel Giroud has put it, “Henri Chopin has consistently and unceasingly opened the ways to unexplored spaces beyond all known languages. Thanks to the systematic use of microphones, amplifiers, tape recorders, editing and mixing consoles, he has given voice to realms beyond modern or experimental music, beyond any note system and headed for spaces without norms, categories, definitions or limits: spaces of permanent metamorphosis”.

At the invitation of Michel Giroud, Joachim Montessuis, Yvan Etienne and Masahiro Handa Henri Chopin performed in Besançon, France in 1995. The contact between Montessuis and Chopin that was established at that performance later resulted in the CD La danse des tonneaux roulants et brisés, released on Montessuis’s Erratum Musical label in 2004. The LP Les gouffres des bronches sont des cavernes infinies contains one of the compositions performed at Besançon at the time and another that was aired on France Culture radio in 2013. The LP was released by Erratum Musical in 2022 to commemorate the fact that Chopin was born 100 years ago.

The LP has a 15-minute composition on either side and comes with a download code to Chopin’s 1995 performance in Besançon, an interview of Chopin by Michel Giroud and Joachim Montessuis the day after that performance and the Henri Chopin conference that was held the day before the performance. Also included in the sleeve are the handbill to the 1995 Besançon performance and an insert with liner notes and with photos by Richard Bugner. 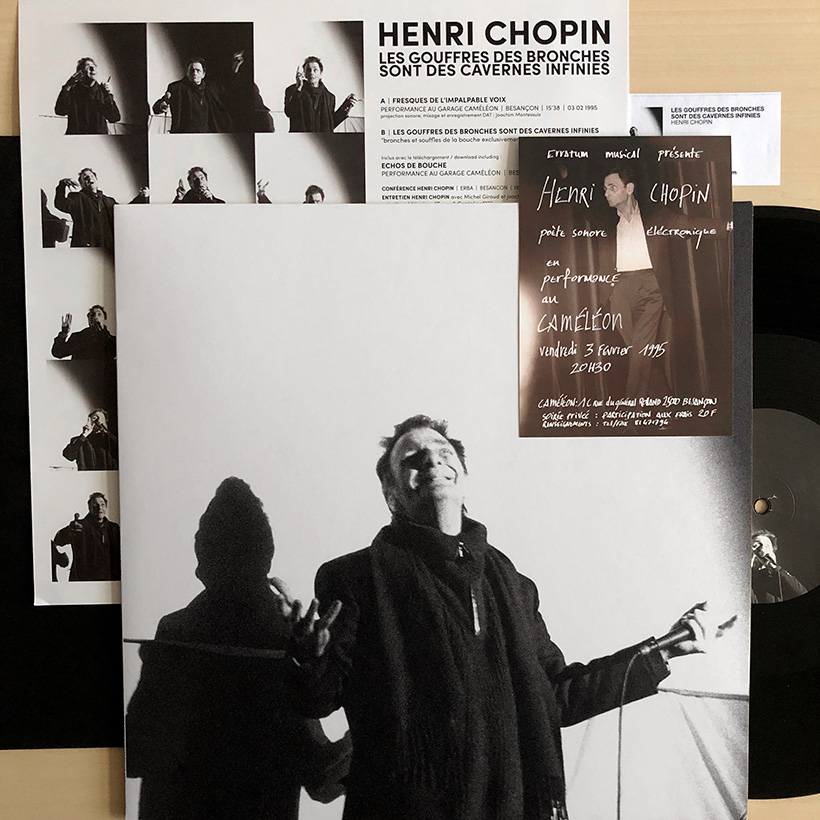